I recently reviewed Loving Lakyn by Charlotte Reagan. This is her newest novel, released in November. Loving Lakyn is the prequel to her debut novel, Just Juliet. I was able to have the chance to do a Q&A with Charlotte in honor of the release. Enjoy! You can purchase Loving Lakyn now on Amazon.

Q1: In Loving Lakyn, all of the chapter titles are a quote from the chapter. Is there a reason why you chose that style?

A: I wish I had a really cool answer for this, but the truth is that I saw it on a fanfiction or something once like years ago and I just thought it was a really neat way to do it haha! I like to think that if someone picked up my book off a shelf and was just leafing through it, the titles would catch their attention enough to want to know what’s going on in that chapter.

Q2: Lakyn finds himself a hobby toward the middle of the book. When you’re not writing, do you have a hobby?

A: I’m an avid tv watcher and reader. I can get a little obsessed with the shows I watch, and once got gifted a ‘home library’ set because I have so many books. If I’m not doing either of those things, you can catch me playing D&D.

Q3: Since the novel is set in high school, which superlatives do you think your characters would be given?

Scott: Most Changed from Freshman Year

Juliet: Most Likely to be Late to Graduation

Q4: There are many serious topics addressed in Loving Lakyn. Which scenes were the hardest to write and why?

A: But on the topic of the more serious matters, it was the cutting scenes. They’re detailed and graphic on purpose, but it was also hard to explain why cutters cut, especially in a way that would make sense to noncutters. It was also pretty hard to write his meltdowns, but mostly just because I want to wrap him in a blanket and take care of him.

Q5: At school, Lakyn puts in his headphones to escape. What type of music would Lakyn listen to?

A: Hahaha I’m notorious for hating music questions, because I don’t listen to a lot of stuff myself, so my knowledge on bands and artists is pretty limited. However, Lakyn’s a big fan of Green Day and Linkin Park.

Q6: Loving Lakyn includes LGBTQ+ characters. Are there any LGBTQ+ books you can recommend that are similar to Loving Lakyn?

A: You know, I really can’t. And this is mostly because Loving Lakyn is such a dark story, and I’m actually not a fan of that stuff myself haha! I much prefer more lighthearted, happy reads.

Q7: Your novel includes a negative coming out story. Is there a specific reason why you chose to write the negative rather than positive?

A: I actually wrote the positive with Just Juliet, which is (technically), the sequel to Loving Lakyn. JJ is all cavity inducing fluff and good stuff. Lena (the main character) still has a bit of a struggle – most LGBT+ kids do, but it wasn’t nearly the rollercoaster that Lakyn or Scott had. The reason why I chose to go the negative route with at least one of their stories was simply because it happens. So does the positive, but it’s not the only option. I kind of wanted to get a broad spectrum.

Q8: For the final question, I must know! Do you have any other novels in the works?

A: Oh man, I hope so! I don’t have any solid plans as of right now, but I’m always writing, so as soon as something concrete reveals itself to me, I’ll write it!

Thanks again to Charlotte for her answers to my questions! They were great.

You can visit http://charlotte-reagan.com/  for more. 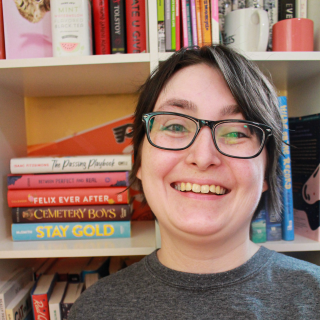 Hi! My name is Alex, 26, Philadelphia native. My pronouns are he/him.his. I am a Booktuber, blogger, and book reviewer. My general reading taste is Contemporary Young Adult novels and anything with LGBTQ+ representation catches my eye. I live for hockey season and I am a coffee addict.

Which Hogwarts house will you be sorted into?